I became interested in animal rights around 2003, and began to question human culture that continues mass-scale slaughtering of animals for pleasure and money, and this motivated me to become a vegan. I’m against all industries and action that abuse, exploit and slaughter animals including husbandry, meat industry, hunting, leather industry and animal testing. Improvement in our dietary habits is especially important. We often hear the typical claim that carnivorism is normal among other species, but our dietary life that is heavily dependent on meat is abnormal according to the energy pyramid. Humans have plenty of food choices, so a dietary habit that willingly kills various species is ethically wrong. The earth doesn’t belong just to humans. We must stop anthropocentrism. Concerning speciesism, I started to believe that “liberation of animals” and “abolishment of speciesism” are issues beyond the horizon of class conflict among humans that must be tackled.
Japan traditionally had a vegetarian diet culture that was influenced by Buddhism since ancient times, but the tradition has totally declined today. There is what is called macrobiotic diet established by Yukikazu Sakurazawa, but this was recently reimported to Japan only after it became popular among celebrities overseas. Sakurazawa ultimately became an advocate of complete vegetarianism that even excludes the use of fish, but many macrobiotic restaurants in Japan still serve fish, hence they are not at all being true to the principles of macrobiotic.
Animal rights movement in Japan is extremely limited. Shelters for livestock are practically nonexistent. There are merely a few animal rights organizations that are fighting a difficult battle. I have participated a few times in the anti-fur demonstration regularly organized by the Animal Rights Center (ARC).
The Japanese Government, together with economic organizations, endorses and justifies whaling, claiming that whale dishes are part of the traditional Japanese food culture. Criticizing Japanese whaling for scientific research or the notorious dolphin fishing in Wakayama Prefecture will immediately attract Net-Uyoku (anonymous Internet users with extreme-right views), who will harass you for being unpatriotic. The meat industry and fishing cooperatives lobby the government and media to be against vegetarianism.
I believe in the principles of Straight edge since I’m anti-drugs, and naturally because consumption of certain drugs is illegal in Japan, and also since I’m anti-smoking and drinking.

– Industrial music, power electronics formats, and harsh noise that have evolved significantly with time are viewed in new ways among different generations and cultures. What do you think about this evolution? How do you see yourself among the “young generation?” In my view, this generation includes Prurient, Damien Dubrovnik, Puce Mary and Pharmakon.

I saw Damien Dubrovnik perform in Harajuku, Tokyo. I collaborated with Christian Stadsgaard in a show in Copenhagen this July. I’ve also recorded an album with him recently, in which I added noise over the drone that he made. The album will be released soon. I know Puce Mary’s music well, too. Their label, posh Isolation, is very active in the scene. I saw Pharmakon perform last year when we participated in the same event in Riga. I work quite often with Prurient’s Hospital Productions. They reissued my 1993 album, “Noisembryo” on vinyl. I also offered a synth loop for Vatican Shadow’s new album. I will also participate in festivals organized by Hospital Productions in New York and the West Coast this December.

– How do you relate to extreme metal? Please explain how its sub genres (i.e. grind core, black metal) influenced your music?

I’m of the generation that grew up listening to Black Sabbath, Deep Purple, etc. in the 70s, but I didn’t listen to New Wave of British Metal. Since the rise of German thrash metal, I listened to a lot of thrash metal, grind core and death metal, and was influenced by them.
I became the first noise artist to sign a contract with the American death metal label, Relapse, in 1994, where I have recorded three albums. In my first album, “Venereology,” there are some grind core-ish phrases at the intro that give some grind core vibe. But my concept as a whole was to make pure noise music released from a metal label that could work as metal, since I thought noise could be considered as “grind core in faster tempo” by metal listeners.
The fact that grind core bands like Napalm Death, Carcass and Cattle Decapitation are involved in animal rights and veganism is what makes me evaluate their music and projects highly.
Then, I released an album from Relapse with a Japanese grind core band, Gore Beyond Necropsy. The album is a true fusion of grind core and noise.
I started listening to black metal around the time when Dark Throne’s sound was changing from death metal to black metal, but I only became particularly interested in it during the late 90s. Dodheimsgard’s “Satanic Art” was the first album that shocked me, and this inspired me to listen to Norwegian black metal bands like Satyricon and bands from label Moonfog. I consider Merzbow’s “24 Hours/Day of Seals,” “Coma Berenices” and “Zophorus” from this era as black metal music that use a laptop computer. “Satans Tornade” that I did with Russell Haswell is also based on a black metal concept. Back then, black metal was a trend among us.
Boris and I released the album “Gensho” from Relapse two years ago, and I’m now working on a vinyl reissue of “Venereology” from Relapse. I’m remixing all the original mastered songs, and I’ve asked James Piotkin to remaster them. I took out a few songs and replaced them with other ones, and I think the overall sound quality is better than the original album. Last year, my second album from Relapse, “Pulse Demon,” was reissued on vinyl from Vaporwave’s label, Bludhoney. Apparently, musical genres are becoming increasingly less significant in recent years, and I find this to be a good trend.

– Your recent albums like Tempi/Matatabi, Merzbeat, Grand Owl, Habitat and Anicca sometimes use drum rhythms that resemble free jazz, or motifs derived from techno. I get the impression that you’re searching for a more minimal application of noise. Are you interested in expanding noise into other musical genres?

First of all, I’d like to point out that Grand Owl Habitat was released in 2013, and others in 2002 and 2009. So, these aren’t my recent albums.
In the early 2000s, I mainly used computer to make albums like Merzbeat that incorporated motifs of techno and dub music. From around 2009, I started to include drums in my work, and I also started to do shows with drummer, Balazs Pandi. I was originally a drummer, but I had almost never used drums until then, so doing so became a new personal challenge. In the 13-disc series, Japanese Bird Series, released in 2009, I play drums in almost all tracks. So, playing with Balazs seemed like a natural process to me. During the early period of Merzbow, I formed a duo with Kiyoshi Mizutani, where we played the drums, piano and guitar in a free improvisation format. I was heavily influenced by European free music of ICP, FMP, INCUS, etc. at the time. I would also listen to free jazz of ESP DISK, BYG and SUN RA. So, having similar factors in my work seems natural to me. As I’ve already stated, musical genres don’t mean much today. You just mix what you like, how you like.

– Noise is increasingly becoming popular, and is beginning to intertwine with the techno/club cultures in recent years. How do you see the recent crossover between noise and club music?

The notion of drawing a line between techno and noise has become totally meaningless. In the narrow sense of the word, “club,” I was involved in the club scene from the late 90s to early 2000s. I performed in many all-night events at clubs. I also performed often with artists from Mego. But once I quit drinking and smoking I stopped going to these “club culture” venues. I couldn’t stand being in venues that reeked of cigarettes and alcohol. Venues in Japan are especially terrible where in many cases smoking is still allowed inside.

– You’ve collaborated with artists of various backgrounds and sensibilities from Genesis P. Orridge, Richard Pinhas, BalaszPandi, Sunn O)))), John Wiese to Pan Sonic, Alec Empire, Boris, and even Mats Gustaffson. Does it change your way of working? What distinction do you make between live collaboration and studio recording collaboration?

In live collaboration including studio sessions, I basically improvise. Whereas when I collaborate through exchanging data, I edit and process various sound sources using computer DTM, so in these cases I would consider my works as compositions.

– Most of your works are recorded on cassettes, records or CDs. What is your opinion on works getting distributed directly in digital format via YouTube, for example? What do you think about the drastic change in Internet use that allows listeners to acquire music recorded confidentially by artists with simply a single click?

I release my works on analog media, but many of them get distributed digitally via Editions Merzbow. Few titles are released strictly digitally, but that’s because digital media is comparatively cheap and less profitable. Naturally, analog media have their share of advantages; for example, having cover artwork, satisfaction of physically owning the product, or being able to sell copies at the venue, etc.
The problem of Internet distribution is copyright infringement. There were multiple cases in the past where people pretended to be me and sold my work Merzbow songs on Bandcamp. One Hungarian, who committed this offense multiple times, was identified, but filing a suit is difficult. It’s extremely troublesome to request for deletion every time you spot infringement. There are many people that ignore copyright laws and upload Merzbow songs on YouTube, and responding to each and one of them is extremely time-consuming. Even if you do, new infringers pop up one after another. I could stand those who just listen, but downloading songs or selling them is just despicable.

– Since the early 2000s, avant-garde and extreme computer music artists have used technology in unorthodox ways. You also incorporated the use of computer and digital technology since the late 90s. In your early recordings, you used concrete collage, electron oscillators and sound fragments instead of consecutive vortexes of climax as displayed in 抜刀隊 With Memorial Gadgets. This method of editing and cutting is reused in the album, “1930,” using digital software. Why did you choose to go back to using analog devices and hardware? Is there any hardware that you like in particular?

I switched completely to using laptop computer in the late 90s. Practically nobody used computers for noise back then. I received a lot of criticism for going fully digital. But my analog equipment was only increasing, and it was inconvenient to carry them around. Mac introduced the G3 at the time, which finally allowed me to perform live using a computer. Plus, using only a laptop seemed to me like an interesting idea. But now that everybody is using their laptop, I decided to go back to using analog. But I also use computer for recordings, of course.
I don’t use any digital software in “1930.” I mixed tapes in real-time for the entire album. I used a lot of Poly Phase of Electro Harmonics for the recording.
My must-have equipment for performing live is the Roland Double Beat Fuzz-Wah pedal. And, of course, the Amplifire Metal Scrap.

– What are you listening to these days? 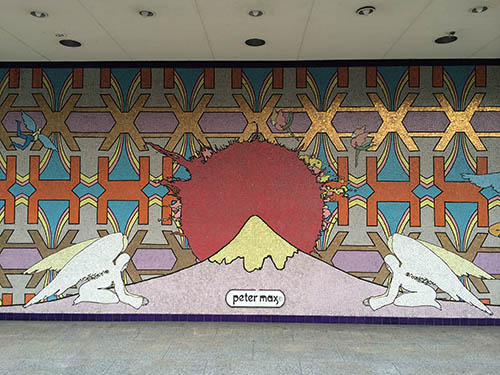 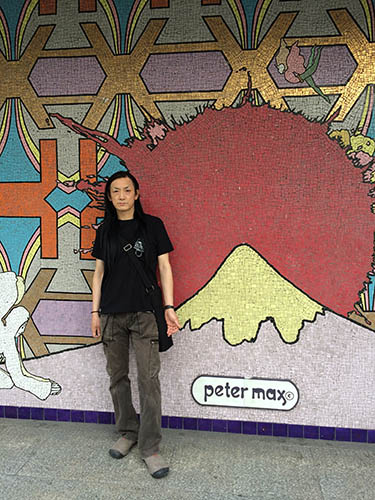 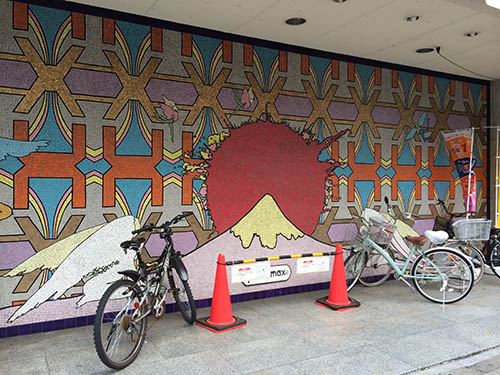